Usually I don’t have much patience with 8-bit nostalgia, but man-oh-man, I’m in love with the PocketCHIP handheld computer, and the PICO-8 fantasy console.

The PICO-8 is 8-bit nostalgia done right. It’s not about reminiscing about how good particular games were. It’s about recreating the whole 8-bit experience. Well, not the whole experience. It eliminates all of the frustrating bits! Nobody is honestly nostalgic about loading games from tapes, for example. What it does recreate is the experience of having a simple computer that you can dive in and make it do what you like, but without feeling like you’re being coddled by a educational software for babies. You can play games on it, you can make games on it very easily, or you can play games, then edit them, and then play them again.

They’ve done a lot to replace the frustrations of old 8-bit computers with modern conveniences without compromising the spirit of the thing. You don’t load the games from tape, and even the “cartridges” are not real cartridges, they’re just specially gimmicked png files. The old ubiquitous MS BASIC has been replaced with LUA, which has similar capabilities but is much more flexible and modern. And finally, you don’t have to trade cassette tapes with your friends in the school yard then hope your dad’s stereo system can make a working copy, there’s an online repository for Pico-8 games! And the games can be exported to html5 so they can be played on the web by people who don’t have a pico-8 emulator handy! (See below!) 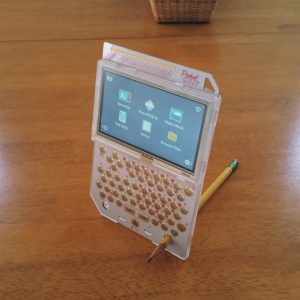 You could run the PICO-8 emulator on your desktop computer, or your Raspberry Pi, but somehow it feels so much more fun to have special hardware for it. This is the PocketCHIP computer. It’s a passable enough pocket linux system. The software is perfectly hackable, and it’s got solder pads accross the top for hardware hacking. Best of all, it comes pre-loaded with PICO-8, and that’s where it really shines.
Ok, the keyboard is a bit wonky, but for serious typing you can plug in a USB keyboard, and let’s be honest : A wonky keyboard is a legitimate part of the 8-bit experience!

I made a game! 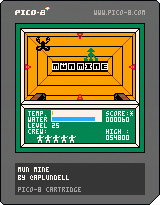 So I made a game. I decided that the first game I should make for this system would be an homage to the earliest game I have strong memories of playing : “Moon Mine“. Published in 1983, “Moon Mine” was available only on the TI-99/4a, Which means that nobody has ever heard of it. I had it though, and it was a blast. For years this was my favorite game.
So here’s my remake. Made from memory and by closely examining the old game manual I found in the basement.

This entry was posted in Blog. Bookmark the permalink.